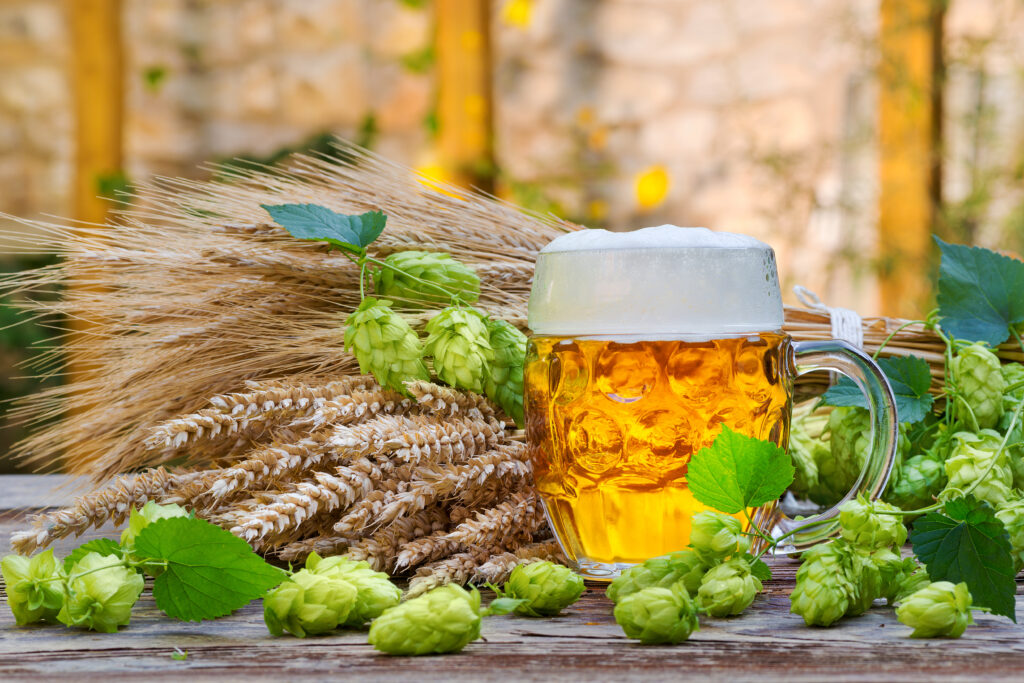 Czech beer brewing has a long tradition and is one of the most famous in the world. According to Czech regulations, beer means a frothy drink made by fermenting wort prepared from malt, water, untreated hops, processed hops or hop products and brewer´s yeast. From a sensory point of view, Czech beer can be characterized by higher fullness and bitterness.

The oldest documented Czech tradition of brewing beer has the Břevnov Monastery in Prague, which was founded in 993.

The first direct evidence of local beer production is the Vyšehrad chapter foundation charter of the first Czech king Vratislav II. from 1088, in which the monarch granted the chapter of tithes of hops for brewing beer. The oldest evidence of hop growing in the Czech lands is the foundation charter from the 1130s of Prince Břetislav. The greatest prosperity of beer production in the Czech lands occurred in the 12th century, when anyone in the state had the right to brew beer.

In these old days, women in every household brewed beer in a very primitive way. For a simple reason, it did not only serve as a drink, but various dishes such as soups, porridge and sauces were prepared from it. Drinking water from public sources was not safe and beer, which had previously undergone a brewing process, was much safer for normal consumption. The development of artisanal beer production began in the 13th century with the founding of many new royal cities within Czech lands.

Malting guilds in the Czech lands were of great importance for the development of brewing and the quality of beer. They determined how much beer and how much malt a house could make, checked its quality and, unlike the surrounding countries, supervised that only one who had properly learned the field brewed beer. Therefore, Czech beers were already very high quality in the Middle Ages and were widely exported to the surrounding countries and to the courts of other monarchs.

In the 14th to 15th centuries, wealthy townspeople pooled their funds and founded joint city breweries. Towards the end of the Middle Ages and around the middle of the 16th century, beer production developed in aristocratic breweries, and was steadily maintained or expanded in monastic breweries, which were less subject to the effects of political and economic changes.

An important milestone in Czech brewing was the establishment of the Municipal Brewery in Pilsen (today's Prazdroj, famous Pilsner Urquel Beer) in 1842, which produced exclusively bottom-fermented beers. The beer was of very good quality and in a short time all breweries in the Czech Republic and Moravia introduced this production technology.

In the middle of the 19th century, the golden age of Czech brewing came, which strongly influenced the development of this branch all over the world. It is the period of the beginning of the industrial production of malt and beer.

The young hop shoots were already eaten by gourmets in Rome as a delicacy with salt, pepper, vinegar and oil. Older sprouts were cooked and used as asparagus. Hops have been described as an appetite-stimulating vegetable that calms the nerves of diners. The Czech hop is quite specific and differs from hops grown in the world, especially in its ratio of alpha and beta bitter acids.

Rotating hops (Humulus lupulus) are used in the Czech beer production process. It has been known and cultivated in Bohemia since the 11th century. It also grows wild, for beer production it is grown in traditional hop-growing areas. The most famous variety of the local Czech hops is the half-red robin from Žatec, which also received a protected designation of origin. These are areas in northwestern Bohemia, around the towns of Žatec, Úštěk and Tršice.

The most suitable for the production of Czech beer are food yeast strains, guaranteeing the so-called bottom fermentation.

developed over many decades and was preserved during the period of totalitarian regimes. While breweries around the world reduced their beer production costs by introducing modern technologies, Czech breweries did not have this option and still produced beer traditionally, which now seems to be an advantage because our beer has retained its original unique properties.

After years of negotiations at the level of Czech breweries and EU institutions, the Czech Beer – České pivo brand was registered in 2008. The České pivo brand has helped to stabilize hop cultivation, saved the breeding of Czech barley and guarantees Czech beer protection against unfair competition.

At present, you will find 800 breweries in the Czech Republic producing 11,925 different brands of beer.

Taste uniqness of the Czech Beer on my Tasting Prague Food Tour.